Anatomy and Physiology of the Aerodigestive Tract

The nasal cavity refers to the interior of the nose, or the structure which opens exteriorly at the nostrils. It is the entry point for inspired air and the first of a series of structures which form the respiratory system. The nasal cavity is involved in warming, humidifying and filtering air.  It also resonates sound and aides in our sense of smell and taste.

The inside of the nose is lined with cilia or small hairs as well as mucous membrane.  Nasal hairs in the nares trap particles to prevent them from entering the respiratory tract.  The mucous membrane supports the body’s immune system.  It is sticky and helps to trap pathogens to protect against infection or allergies.

The lateral walls of the nose include three structures called the turbinates (inferior, middle, superior), which are finger like projections composed of bone and covered in soft tissue and mucosa.  The turbinates increase the mucosal surface of the nasal cavity and regulate nasal airflow.  Beneath each turbinate is a cleft or meatus.

The nasal cavity is separated at midline by the nasal septum into the left and right side.  The nasal septum is composed of cartilage anteriorly, and bone posteriorly.  The bony septum is made up of the perpendicular plate of the ethmoid bone, vomer bone and maxilla bone.  The right and left nasal cavities become one at the choana, which is the opening of the nasopharynx. The conchae (turbinate bones) of the nasal mucosa expand the total surface area of the mucosa and create turbulence for air entering the respiratory passage. This causes air to swirl as it moves through the nasal cavity and increases contact between infiltrating air and the nasal mucosa, allowing particles in the air to be trapped before entering other parts of the respiratory system.

The nasopharynx contains a collection of lymphoid tissue called the adenoids.  The Eustacian tubes each open into the sides of the nasopharynx, connecting the middle ear with the upper respiratory tract. 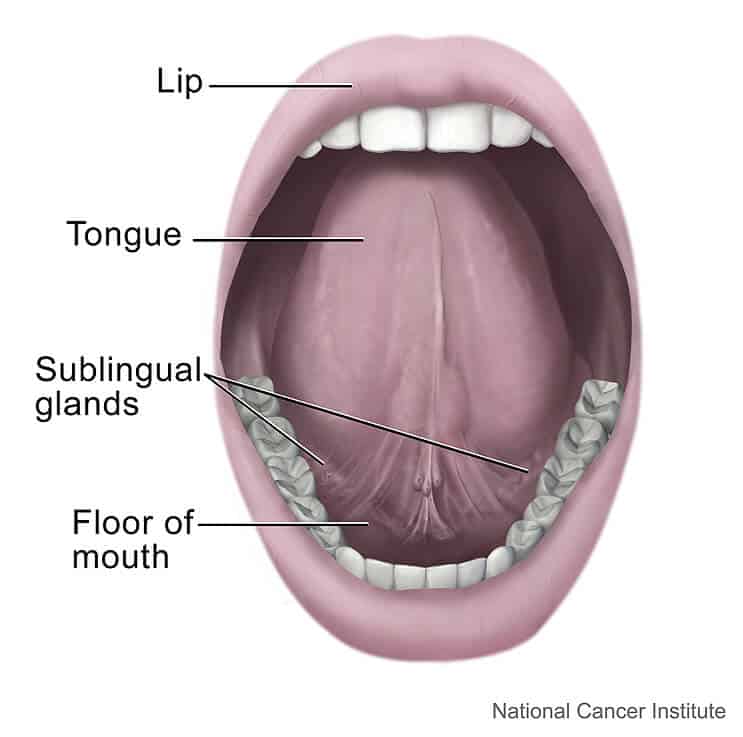 The lips seal the oral cavity which creates a pressure gradient for both speech and swallowing.  For speech, the lips are important for making bilabial sounds, /m, p, b/.  For swallowing, the lips form a seal so that food and liquids are not spilled anteriorly.

The tongue is used for preparing food into a cohesive ball or bolus.  The tongue is also an important articulator, used to shape speech sounds.

The oral cavity plays a significant role in respiration and it is also important for swallowing, digestion and speech. 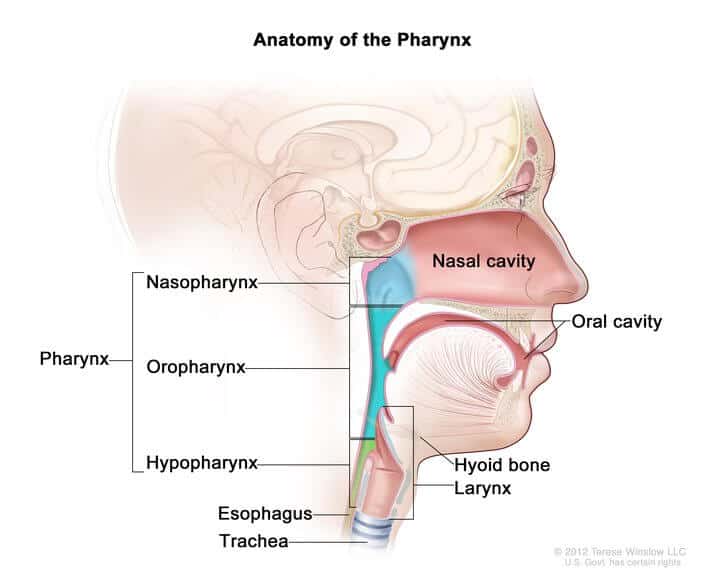 The oropharynx includes the posterior third of the tongue (base of tongue), vallecula, palatine tonsils and tonsillar fossa, faucial arches, retromolar trigone, pharyngeal walls of the superior and lateral pharynx, soft palate, and uvula.

The pharynx is a dual passage for respiration and swallowing.  It serves as a conduit for moving air to and from the lungs.  The pharynx also functions to transport boluses of food and liquid from the oral cavity and into the esophagus and stomach.  The pharynx must coordinate respiration and swallowing.  The palatal muscles, the extrinsic tongue muscles, and the hyoid muscles maintain the patency of the pharyngeal airway.

A gag reflex may be induced by touching of the base of the tongue, soft palate, uvula, or posterior pharyngeal wall.  The gag reflex is considered a protective reflex to prevent foreign material from entering into the pharynx.  The presence of a gag reflex varies among the normal population with up to 37% having an absent gag reflex (Davies et al, 1995).  Therefore, lack of a gag reflex is not an accurate predictor of dysphagia (difficulty swallowing).

Muscles of the Pharynx:

During swallowing these muscles constrict to propel the bolus downwards (an involuntary process).

During swallowing, these muscles act to shorten and widen the pharynx.

The vallecula is the space between the base of tongue and the epiglottis.  It is a common landmark during intubation.

The soft palate is a mobile portion made of up fiber and muscle that is suspended by the hard palate and ending at the uvula.  During swallowing, the soft palate elevates to contact the lateral and posterior walls of the pharynx, to prevent bolus regurgitation into the nasal cavity.

The epiglottis is a flap of tissue located at the base of the tongue.  It separates the respiratory and digestive systems for airway protection.  The epiglottis typically tilts downward during deglutition due to elevation of the larynx and approximation of the hyoid bone and thyroid cartilage (Ekberg, O et al, 1982).  It acts as a rudder to deflect food laterally, away from the airway to help protect the airway from aspiration.  In a case series, patients with an isolated epiglottectomy, were able to functionally swallow without aspiration (Leder, et al, 2010). 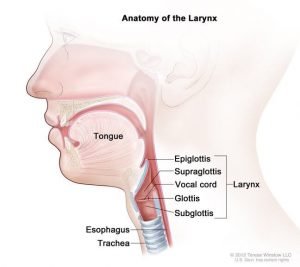 The larynx (voice box) is located between the pharynx and trachea. By adulthood, the larynx descends inferiorly.  The larynx functions in breath control,  voice production, and protection of the airway against aspiration.  The larynx houses the vocal folds.

The epiglottis is one of nine cartilaginous structures that make up the larynx.  During breathing, it lies completely within the larynx. During swallowing, it serves as part of the anterior of the pharynx.  The depressions between the base of tongue and epiglottis are called valleculae.

The cuneiform cartilages are 2 small, club-shaped cartilages that lie anterior to the corniculate cartilages in the aryepiglottic folds.

Nerve Supply to the Larynx

The larynx is innervated by the vagus nerve (X).  The vagus nerve is the longest nerve in the autonomic system in the human body.
There are two branches:

Muscles of the Larynx

The larynx is composed of intrinsic and extrinsic muscles.

The suprahyoid and infrahyoid muscle groups attach to the hyoid bone, which is bound to the larynx by strong ligaments, allowing the larynx to be moved as one unit.

The supraglottis, glottis and subglottis are the three anatomic subsites of the larynx.

Subsites of the larynx

The glottis is the space between the vocal folds.  Intubation may cause injury to the glottis due to pressure from the arytenoid cartilages.

The subglottis or subglottic region is an anatomical area of the larynx that is located inferior to the glottis.

The subglottic region is also an area of injury due to intubation.  Pressure or movement of the endotracheal tube can cause necrosis.  Tracheal stenosis may also occur in the subglottic region from intubation or due to complications of a tracheostomy cuff.  See cuff management for more information.

The esophagus is a muscular organ that allows for the passage of food into the stomach.  The esophagus begins at the upper esophageal sphincter (UES).  The UES is a muscular band that relaxes to allow food to enter the esophagus when the larynx elevates & pulls forward.

The lower respiratory tract is the part of the respiratory system from the trachea to the lungs. There are 16 to 20 C-shaped cartilage rings that serve to support the trachea to keep it patent during respiration. A tracheostomy incision is usually cut between the first and second or second and third tracheal ring.

The posterior  trachea and the anterior esophagus share a common muscular wall that lacks  cartilaginous structure.  This smooth muscle allows the esophagus to bulge into the tracheal wall during a swallow, permitting the food bolus to pass to the stomach.

The bronchi divides further into secondary and tertiary bronchi, which continue to branch to smaller airways called the bronchioles. The bronchioles end in air sacs called the alveoli.  The alveoli are tiny balloon shaped structures that are the smallest passageway in the respiratory system, that are arranged in clusters in the lungs.  There are about 600 million alveoli in healthy lungs.  They allow for gas exchange to occur.  Alveoli are lined by a fluid layer known as a surfactant, which maintains the shape and surface tension of the air sac.

There are many medical conditions that can effect the alveoli and cause the alveoli to become inflated and/or scarred.  These conditions include emphysema, pneumonia, tuberculosis, acute respiratory distress syndrome (ARDS), and pulmonary edema.

The lower respiratory tract is not involved in digestion.  If food or liquid reaches the lower respiratory tract, the term used to describe this is aspiration.  Aspiration is when any foreign material (food, liquid, secretions, reflux) enters the airway below the level of the vocal folds.  Aspiration pneumonia is a complication that can occur from aspiration.  Not every patient who aspirates will develop pneumonia.  Individuals who have poor general health and poor oral care are at highest risk of developing pneumonia due to aspiration.

The lungs are a vital part of the respiratory system.  The lungs are a pair of spongy, air-filled organs located on either side of the thorax (chest).  They divide into smaller segments called lobes.  The right lung consists of three lungs and the left lung is slightly smaller containing two lobes.

The lungs are covered by two thin tissue layers called pleura, which protect and cushion the lungs .  The visceral pleura (inner layer) covers the lung surface.  The outer layer (parietal pleura) lines the inside of the chest wall. The very thin space between the layers is called the pleural cavity.  A liquid, called pleural fluid, lubricates the pleural cavity so that the two layers of pleural tissue can slide against each as the lungs inflate and deflate during breathing.  There is no anatomical connection between the right and left pleural cavities. A pathological condition of the pleural fluid is called pleural effusion.

The primary muscle of inspiration is the diaphragm.  The diaphragm is a dome shaped muscle in the resting position.  During inspiration, the diaphragm and external intercostal muscles contract.  The diaphragm moves inferiorly, increasing the volume of the thoracic cavity. This causes the intrapleural pressure to become more negative, which increases the transpulmonary pressure, causing the lungs to expand. The expansion of the lungs lowers the intrapulmonary pressure below atmospheric pressure. Air, following its pressure gradient, now flows into the lungs.

During expiration the muscle returns to the relaxed, dome shaped position.  During expiration, the diaphragm and external intercostal muscles relax, decreasing the volume of the thoracic cavity. The intrapleural pressure becomes less negative, the transpulmonary pressure decreases, and the lungs passively recoil. This increases the intrapulmonary pressure so that it rises above atmospheric pressure.  Air, following its pressure gradient, moves out of the lungs.

The pectoralis major and minor, strap muscles of the neck, sternocleidomastoid and scalene muscles are all accessory muscles of inspiration used during forced breathing such as physical exertion.

You have already reported this .
Clear Clear All