What is a Laryngectomy?

A laryngectomy is very different from a tracheotomy procedure, but is often confused.  Confusion over whether an individual has a laryngectomy or tracheostomy during an emergent setting can result in adverse consequences for the patient.  It is imperative to understand the differences.

A partial laryngectomy is a more common treatment for laryngeal cancer.  It is a surgical procedure that is meant to preserve the voice.  The airway is not separated from the nose and mouth.  One or a partial piece of the vocal fold is removed.  A tracheostomy tube may be temporarily placed.

A total laryngectomy is typically performed when the disease cannot be managed with more  conservative measures. In a total laryngectomy the entire larynx is removed (including the vocal folds, hyoid bone, epiglottis, thyroid and cricoid cartilage and a few tracheal cartilage rings).  The airway is separated from the nose, mouth and  esophagus.  The trachea is brought forward below the level of the larynx and is sutured to the base of the neck just above the sternal notch, creating a permanent opening in the neck called a stoma.   Therefore, the individual does not breathe through the upper airway.   Instead, breathing occurs through the stoma.  Breathing, speech and swallowing are significantly changed after the procedure.

Here is a video of the laryngectomy procedure on YouTube.

Since the stoma is the only passageway for breathing, it is important to maintain the airway and suction the trachea through the stoma as needed, using a sterile technique. It is also important to clean the stoma, as crusting of secretions may develop that can block or occlude the stoma. It is important to teach the patient, family and/or caregivers how to care for the stoma properly, and what to do in case of an emergency.

Anatomy and Breathing After Total Laryngectomy 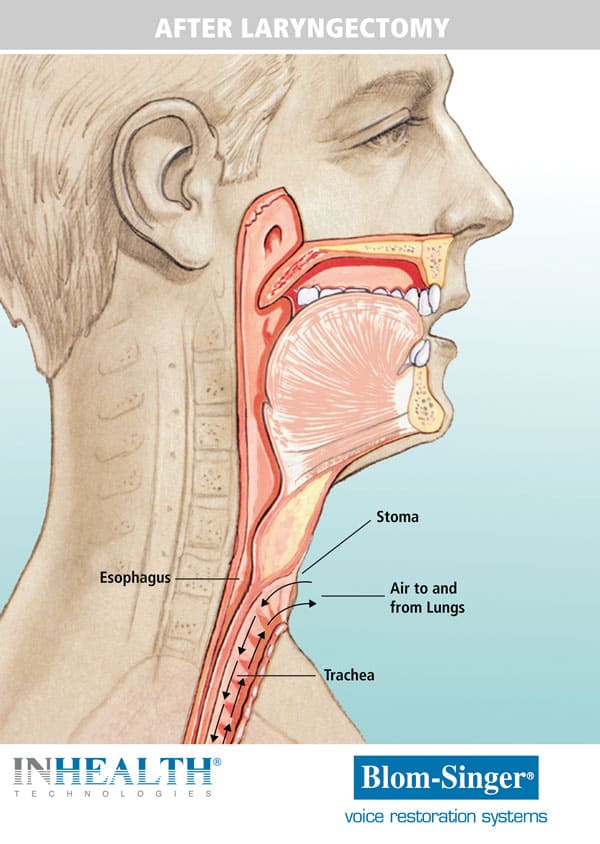 Take note of the airflow in the images above.  On the left, normal breathing occurs where air is inhaled through the nose where it is filtered by mucous membranes and cilia.  Air is then humidified and travels to the lungs.  Exhaled air follows the path back out through the upper airway and out the nose and mouth.

The image on the right depicts the anatomy following a total laryngectomy.  Air bypasses the upper airway and therefore does not get filtered, heated or humidified.  Instead during inspiration, ambient air flows in directly through the trachea and into the lungs.

Since the mouth and nose are bypassed, special care must be taken to humidify the airway.  In the hospital this humidification will be provided with a cool or warm aerosol and a trach mask.  Later on, the patient may prefer to use a heat moisture exchange (HME) device. An HME is a foam filter that helps to filter, warm and humidify the air since those functions are lost after a total laryngectomy.  An HME helps to reduce coughing, mucus production, and chest infections

To understand the changes that occur after laryngectomy, it is important to appreciate normal speech.  In order to produce natural voicing with a normal airway, there are three main occurrences:

An individual with a total laryngectomy will not produce speech with his/her natural voice because the vocal folds are removed when the entire larynx is removed.  Therefore there is no vibrating mechanism to produce sound.  The trachea is separated from the upper airway so that airflow no longer flows from the lungs through the upper airway.  AIrflow with a laryngectomy is redirected out through a stoma in the neck and does not pass through the articulation tract.  Loss of speech is often cited as the most disturbing consequence of a laryngectomy.  It can greatly reduce the individual’s quality of life.

Over the past 50 years, there have been significant advances made in techniques for voice restoration for individuals with laryngectomy.  Alternative options for speech with a laryngectomy include esophageal speech, an electrolarynx, , or tracheal esophageal speech through a tracheoesophageal prosthesis (TEP).    Each method has advantages and disadvantages.  A speech-language pathologist may assist in communication options and learning techniques.

An electrolarynx is a device that produces a vibration to act as a sound source when placed on the lateral neck, cheek, or in the mouth with an intraoral adapter.  The external vibration replaces the vibration of the vocal folds by producing a tone. The tone is transmitted into the oropharynx, where sound is shaped by the articulators (lips, tongue, teeth, jaw) into meaningful speech.  The lungs are not used to produce a sound source, and therefore there is no reason to exhale during speech production with an electrolarynx.

Training may focus on optimal placement of the electrolarynx, timing, and strategies such as overarticulation or phrasing.

Some patients are able to achieve

Few states provide access to free assistive equipment for hearing, mobility or speech disabled.  The Telecommunications Equipment Distribution Program has a map of states that participate.

Speech with a trachesophageal prosthesis (TEP) is the most natural and intelligible speech following laryngectomy.  A small surgical passage way or tracheoesophageal puncture is created from the posterior wall of the trachea connecting to the esophageal wall.  The puncture can be made by the surgeon either during the laryngectomy procedure or afterward in a separate procedure.

A small voice prosthesis is then placed into the passageway to enable speech. The TEP uses a one-way prosthesis to let air pushed up from the lungs to pass through from the trachea and enter the esophagus, causing the walls of the esophagus to vibrate as a new voice.  The airflow then travels through the oropharynx where sound is shaped by the articulators (mouth, lips, tongue).  The stoma must be covered for speech to occur and airflow to divert through the TEP.   The stoma can be covered by the finger or by pressing on an heated moisture exchanger (HME).

A properly functioning TEP remains closed so that food and liquids are prevented from entering from the esophagus and into the trachea.   One of the most difficult complications to manage after TEP is enlargement of the TE puncture that results in aspiration of saliva, liquid, and/or food around the prosthesis into the trachea. Leakage of saliva or ingested food around the prosthesis occurs with the reported rate ranging from 7% to 42% of the cases (Laccourreye et al, 1998).

Although many advances have been made over the years, these devices are not permanent and will require periodic replacement by a skilled clinician, typically an ENT or SLP. 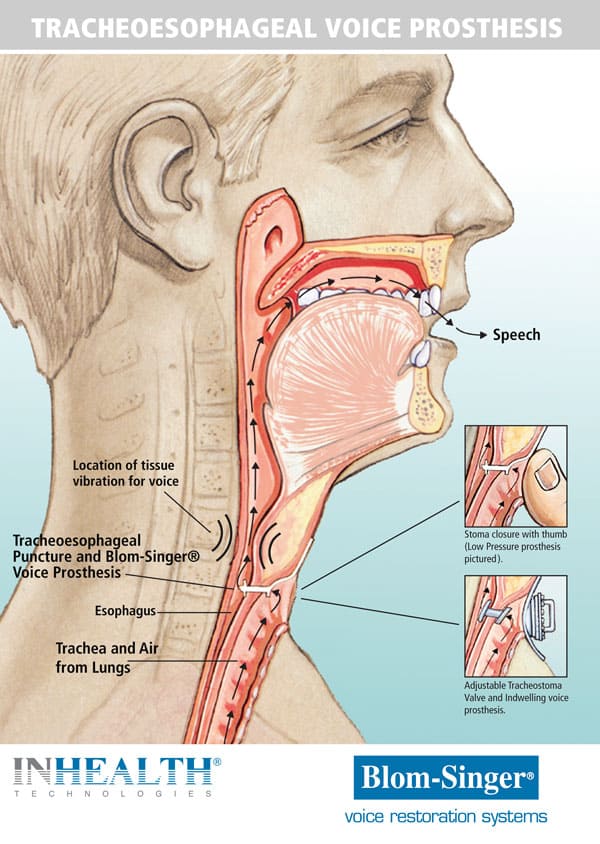 It was previously believed that after a total laryngectomy, swallowing would not be affected. However, dysphagia is recognized as a common occurrence following laryngectomy, with estimates ranging from 17-70% (Balfe et al., 1982; Maclean et al., 2008).  In a total laryngectomy, since there is separation of the trachea and esophagus, aspiration is anatomically not possible unless there are complications.

Aspiration is possible with a laryngectomy.  Aspiration can occur from malfunction of a voice prosthesis where leakage occurs out the prosthesis, directly into the airway .  Pharyngocutaneous fistula (PCF) creates a communication between the pharynx and the cervical skin or less frequently with the stoma.  It is the most common postoperative complication of laryngectomy, with variable ranges of 3% to 65% in reported series, most falling within the 10%–40% range (Paydarfar & Birkmeyer, 2006).  The most common symptom is leakage of pharyngeal contents, usually saliva, or food if an oral diet has been implemented, flowing through the fisula and emerging from the cutaneous orifice.  A barium swallow is indicated to exclude the presence of a PCF.

Besides aspiration, patients with laryngectomy may complain of difficulty swallowing with foods feeling “stuck.”  This is common when there is harvesting of tissue from another part of the body for the surgery.  The new material used for the neopharynx is a conduit for the material to enter into the stomach, but does not provide pharyngeal contractions to push material through. Some compensatory strategies to help pass the food through may include liquids to wash solid materials through, small bites, and moist foods or the use of gravies and sauces.

Incidence of gastroesophageal reflux in patients with laryngectomy is reported to be high. In the immediate postoperative period pathological reflux is reported in 30-40% (Garrido et al, 2007). In the long-term, rates as high as 80% are reported (Smit et al, 1998). In patients with tracheoesophageal vocal prostheses, GERD causes an increase in the fistula diameteGERD is an independent risk factor for failure of TEP (Nicolaescu et al., 2019).

Oral feeding is typically resumed 5-7 days following the laryngectomy surgery in uncomplicated cases.  A liquid diet is first implemented, and then a gradual implementation to solid foods as tolerated.   Oral feeding may be delayed 7-10 days for more extensive surgeries or if there was radiation, which may increase healing time.

Comparison of Laryngectomy and Tracheostomy

It is sometimes difficult to discern whether an individual has a laryngectomy or a tracheostomy from the appearance of the stoma or tube.  It is vital to determine the difference and which one is present, particularly for emergencies.  If there is any question about the history, an endoscopy can determine if there is an upper airway present.  Communication and teamwork are critical to keeping patients safe and preventing adverse events.

The patient with a tracheostomy has a potentially patent upper airway as an alternative means of ventilating and oxygenating the patient.  A patient who has had a laryngectomy does not have any communication between the upper airways (nose, mouth, pharynx) and the lungs and can only be oxygenated and ventilated via the laryngectomy opening in the neck.

The following algorithms and bedhead signs are available through the National Tracheostomy Safety Project:

There are several types of laryngectomy tubes, and since many of them look identical to tracheostomy tubes, it is important to recognize the differences in this airway.   ‘Lary’ tubes are sometimes used in place of a tracheostomy tube to maintain the patency of the stoma. Their length and bending angle are designed for an optimum fit into the newly constructed airway.

The Laryngectomee Guide is available for free download from the American Academy of Otolaryngology Head and Neck Surgery website.

Laryngectomy HME and Other Humidification Options

You have already reported this .
Clear Clear All