Tracheotomy is the name of the surgical procedure to make an opening in the trachea (airway).

Tracheostomy is the resulting stoma (hole) through which a tracheostomy tube is typically inserted and secured to keep the airway patent (open).  However, both terms are often used interchangeably.

A tracheostomy tube is typically placed through the stoma to provide access to the trachea for breathing and to remove secretions from the lungs. The tube enables airflow directly through the trachea  rather than through the nose and mouth, bypassing the humidification and immune functions of the upper airway (nose, mouth and nasopharyngeal airway).

Airflow During Breathing Through a Tracheostomy Tube 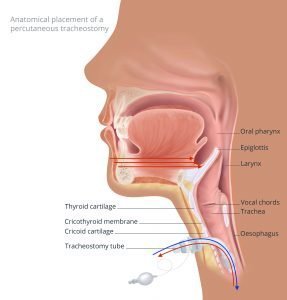 Tracheostomy is one of the oldest surgical procedures and has been documented on Egyptian artifacts as far back as 3600 BC.   The first ‘modern’ surgical tracheostomy is commonly credited to Italian physician Antonio Brasavola, documented in 1596′ (Goodall, 1973).  The procedure was originally only used for upper airway obstructions.

Despite it’s antiquity, tracheostomy was rarely performed until the 19th century, when it had more widespread acceptance and was a common procedure for children with diptheria.  Chevalier Jackson, a Laryngologist from Pittsburgh, established the principals of the open tracheotomy procedure in 1909 and these have grossly remained unchanged til present date.  The first percutaneous dilational procedure is credited to Ciaglia in 1985 (Engels, P., 2009).

Tracheostomy is one of the most frequently performed procedures in critically ill patients today. 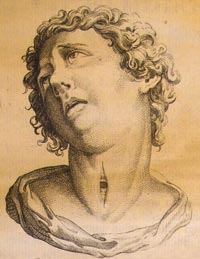 A tracheostomy can be performed for many reasons.  It is important to understand the reason an individual has a tracheostomy tube in order to properly treat the patient and to determine if and when it is safe to decannulate (remove the tracheostomy tube).

When the procedure was originally introduced, the purpose was to relieve upper airway obstruction.  In modern medicine, the indications have expanded to include the following (National Tracheostomy Safety Project):

The extent of time that an individual has a tracheostomy varies.  It can be required for short-term, long-term and in some cases it can be permanent.

A tracheostomy may be placed surgically or percutaneously.  A surgical open tracheostomy and percutaneous dilational tracheostomy (PDT) both require similar anethesia, analgesia, positioning, and sterile technique.  In both procedures, the patient is positioned supine with the neck extended (unless the patient requires cervical spine precautions)(Engels, 2009).  Care should be taken that all equipment is at bedside and functioning adequately.  Prior to insertion, the cuff of the tracheostomy tube should be tested to make sure it is working properly.

When the tracheostomy is an elective procedure, it is important to obtain consent for the procedure and to educate the patient on the rationale behind the decision for a tracheostomy.  The patient should also be informed that postoperatively there will be a period of communication difficulty due to a lack of airflow through the vocal folds, resulting in aphonia (no voicing) or limited voicing.  Complications of tracheostomy should also be reviewed.

An open tracheostomy procedure is performed in the operating room, typically under use of general anethesia.  The patient is first optimally positioned and then important landmarks are identified including the thyroid notch, sternal notch and cricoid cartilage.  The procedure involves making a 2-3cm horizontal or vertical incision between the sternal notch and thyroid cartilage (approximately over the second tracheal ring).  Dissection continues down to the strap muscles, which are separated, exposing the isthmus of the thyroid gland and the trachea.  The isthmus may be detracted or divided.  The trachea can be entered vertically or horizontally with excision of a portion of the anterior wall or creation of a flap (Bjork flap) of the wall.  The Bjork flap is created as a preventative measure, to aid in reinsertion of the tracheostomy tube in case of accidental dislodgement, especially in difficult airways or obesity (Moris, L et al, 2013).  After the airway is confirmed to be intact by direct visualization, end tidal CO2, ease of ventilation and adequate oxygen saturations, the tracheostomy tube is secured (Engels, 2009).

Percutaneous tracheostomy has become the technique of choice in many critical care units because it can be easily and rapidly performed at the bedside, therefore costs are often reduced. It is typically performed solely on intubated patients and can be done without direct visualization of the trachea.  However, bronchoscopy is considered the standard of care to guide and confirm placement of the tracheostomy tube within the trachea (Morris, L. et al, 2013).
A 2 cm transverse incision is made through the skin of the neck approximately 2 cm below the palpable cricoid cartilage at the level of the second tracheal ring.  Blunt vertical dissection is followed by tracheal puncture.  Guidewire insertion is next, followed by needle removal and dilation. The tracheostomy tube is then introduced along the dilator and guidewire. The dilator and guidewire are then removed, the cuff of the tracheostomy tube is inflated, and the ventilator circuit is connected. The endotracheal tube can then be removed (Engels, 2009).

NOTE: The Intensive Care Society standards state that in every hospital a list should be kept of practitioners competent in undertaking percutaneous tracheostomy insertion.

The tract will take 7-10 days to mature after the percutanous procedure, compared with 2-4 days for a surgical tracheostomy.  If there is accidental dislodgement in the early days following a percutanous tracheostomy, there is a higher likelihood that the stoma may close quickly versus the surgically placed tracheostomy tube is more likely to remain patent.

There is still much debate in the literature surrounding the topic of optimal tracheostomy timing.  In the Tracman study, a multicentered randomized clinical trial, early tracheostomy (within 4 days) was not associated with improved mortality, decreased length of stay or significantly reduced complications.  There is widespread agreement that if the patient has a prolonged need for an artificial airway, then insertion of the tracheostomy tube is the preferred approach.

Tracheostomy is commonly performed when clinicians expect a patient will need prolonged mechanical ventilation.  Up to one third of patients requiring prolonged mechanical ventilation now receive a tracheostomy (Young, 2013).  Benefits of tracheostomy include reduced sedation, reduced trauma to the oropharynx and larynx, reduced work of breathing, improved clearance of pulmonary secretions, quicker weaning from mechanical ventilation, and reduced length of ICU and hospital stay (Rodriguez et al, 1990; Bouderka et al, 2004; Rumbak et al, 2004) as well as reduced incidence of nasocomial pneumonia and improved patient comfort (Young, 2013).  The risks of the surgical procedure compared to the expected benefits should be weighed by the team managing the patient.

You have already reported this
Clear Clear All